Now before you start assuming, let me just say it took me YEARS to make it this far. It took me time after time of battling toxic people in my life who continuously belittled me, knocked me down, and treated me like I was not good enough. It was not until I broke away did I begin to realize just how toxic those certain individuals were. Many people still look at me and say “Oh well that’s still your family” or “Don’t you miss talking to your so and so”. Here is the bottom line, being family does not give someone the right to be abusive in anyway no matter if it’s physical, emotional, mentally, etc. Being family does not give someone the right to go behind the other persons back and do everything in their power to bring them down to benefit their own good. Being family does not entitle them to anything. This is a touchy subject for some but I’m going to get real. By the time I became an adult I had witnessed far more than I ever should have and had been through far more than I wish I had. I was being controlled by someone close to me in a very unhealthy way and I felt trapped. I remember waking up feeling absolutely miserable, as if I was in a stand still. Every time I tried to escape their grasp, they would pull me farther and farther in. They made me believe it was me. They made me lie and act as if something was wrong with me to benefit them and those they wanted.

I had grown up believing that this toxic relationship was normal. The controlling, the gaslighting, and the manipulation. Every day was a battle of guilt tripping, lying, hurtful actions, and no boundaries.

I’m not going to lie and say I always thought it was that way and some days were good. But the bad outweigh the good by far. Growing up I thought my life was “normal” and just hard love. I did envy others who had what I thought of as “cool lives” which in reality were just more healthier lives. After my son was born, it was a downward spiral and it finally came to the point I had to make a choice. I could either continue down this unhealthy path of allowing a toxic person to control my life or I could cut them out and learn how to heal. I am here to say it was one of the hardest things to do, but cutting out my toxic family was the best thing I ever did for myself, my family, and my health. I lost many friends and had my image destroyed by lies, disgusting comments, and constant “talk” from those I had known and that person had known. I remember having people spy on my social media reporting back. I even remember that time I was at the grocery store and caught an individual following as they took pictures of me to forward on. It was that bad, I had let it get that bad. I still felt guilt, even though I knew it had nothing to do with me. I still tried to make an effort and possibly fix what had be done, maybe try for a healthier relationship. But every time I would give in, it would bite me shortly after. Which is why one day I opened my eyes and realized that the only way for me to truly move on was to close that chapter. I cut off all communication over 2 years ago and can truly say from the bottom of my heart, it was the most healing experience. I opened my heart and mind to forgiveness although I will never forget.

I have learned that no matter what that person says about me, I know the truth and who I am. And that, that is all that matters.

In the last two years, I have grown into the person I am today. I no longer allow people to walk all over me or my family. I stand up for my beliefs. I refuse to be treated any less than I deserve and do not allow toxic people into our lives. Most of all, I am free. I am free from the toxic life I once lived and feel like a whole new life started the day I closed that chapter. I am no longer afraid of hurting others feelings because I know deep down, it was the best decision for myself and my family. I have become dedicated to helping those who go through similar situations to reach the point that I have. Don’t get me wrong, it is hard when the toxic person is someone who should be there for you and love you in a healthy way. It is hard when you look around at others and that person is missing from your life. But even then, it is far better than living life in constant fear of upsetting that person to then in turn be punished or continuously beaten down mentally until you can’t even speak. YOU are worth more than that. YOU deserve more than to be treated that way. No matter how hard it is, I urge you to walk away if you are going through a battle with someone close who is continuously toxic. I urge you to let go and close that chapter. For the moment that chapter is closed, many more open up.

Signs of a toxic family member

•Blames you for his or her problems

•Humiliates you alone, in front of others, or on social media

•Isolates you from your other family and friends

•Tries to control you and your behavior

•Constantly points out your mistakes or shortcomings

•Nothing you say or do is good enough, constantly bringing up the past or making you feel ashamed of yourself 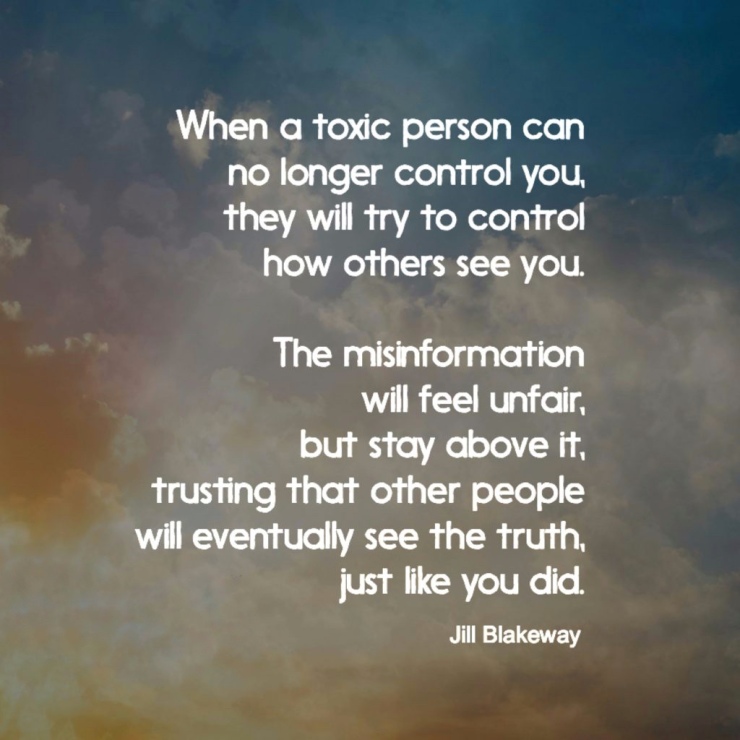 Have you lived with the constant battle of a toxic family member? Send me an email, I would love to talk more!