As long I can remember, even as a child, I struggled with my weight. I was diagnosed with hashimotos disease in kindergarten and later down the road PCOS, SLE Lupus, and Crohns. I was always the “bigger friend” and struggled to maintain a ideal weight. Even when actively playing soccer, I just couldn’t get down to a healthy weight. When I met my husband I was a juniors 13 but weighed 240. I then had kids back to back, ate poorly, and wasn’t active. While pregnant with my daughter, I went though health related problems due to my lupus and was referred to a rheumatologist(who saved our daughters life). She looked at me shortly after having our daughter and said I believe Keto could truly benefit you not just with your weight but your overall health. Now, many people see Keto and automatically think “High fat? That can’t be healthy”. To be truthful, we as people are extremely uneducated on Keto and many just look at google articles or Facebook to judge. The Ketogenic diet is a high, healthy fat, moderate protein, and low carb eating lifestyle. The diet puts your body into a ketosis state which in turn burns fat for energy rather than carbohydrates. The Keto diet is not just a fad as so many claim. For a matter of fact, the Keto diet dates back nearly 100 years to the 1920’s where doctors began using it in patients with epilepsy. Although it has become very popular over the past couple years after many success stories, this diet is often mistaken for being a quick fix. Truth be told, Keto is a lifestyle change. So I’m here to tell you, exactly how I lost 100 pounds in 10 months following the Keto diet and later adding in exercise.

Every one is going to be different and I always suggest no matter what diet you start, consult a doctor. The biggest part of my weight loss journey was finding my will power. Above all tracking, eating right, and walking, getting in a better state of mind to want to be the best me was the biggest reason I lost my weight. I made myself accountable. I refused to allow myself to continue down the path I was going. I woke up and told myself that I was doing this not only for my family, but for myself. I deserved to feel better and be happier. I started out 2 months post partum tight in a 2x and weighing 276, my highest ever. I was miserable and never wanted to get up. I kept telling my husband that I wanted to do Keto but chickened our after a day or two. But then one day, it hit. I looked in the mirror after the shower and was disgusted. I was disgusted I had let myself get to that point. The next day I began my Keto journey and never looked back.

From Start to Two Months Into Keto Diet

The first month was the hardest. I slowly started into Keto so I didn’t get overly sick. I began with 25 net carbs then lowered over the course of 3 weeks. I aimed for 90 grams go HEALTHY fat and 70 of protein. I never counted calories, to me its to much work and never really effected my weightloss. Now some diet plans will tell you different daily macros to stick to, I have catered mine to my body and how I stay in ketosis. By the end of my first month, I was down one size and 15 pounds, a lot of which was bloat and water weight.

Some days were hard, I really wanted to cave in and head a bad meal. Sugar had become an addiction and breaking that was harder than I ever thought imaginable.

But I kept with it. By June, I was reaching the last bit of the 200’s and was down 2 and a 1/2 sizes. I had more energy than I had ever had and began to fall in love with myself once more. My confidence sky rocketed and I bought my first pair of shorts since before I had my son. I slowly introduced walking then hiking and other exercises. I did allow cheat meals, but if you can hold on I highly recommend it. In August I hit a speed bump and couldn’t get over it. I decided to drop my net carbs to no higher than 10 and by the end of October 2018 I hit my goal weight, 175. I had done it, I lost 100 pounds in 10 months.

Intermediate fast. Now, growing up were always taught to never skip breakfast. But did you know fast 16:8 has so many amazing benefits for your body. Not only does it boost your metabolism, but it increases energy, aids in mental clarity, reduces and regulates blood sugar levels, promotes healthy sleep, and even can help hormone levels.

Have a Keto friendly treat here and there. Now, for some this isn’t needed. For me on the other hand, it helped me not splurge. If I was craving something sweet and had enough net carbs left for the day, my favorite was a quest protein bar. It gave me the feeling of having dessert without breaking my ketosis.

Get active. This is my top out of all 5. You can diet all you want but being active is a huge part of getting healthy. Even if you haven’t exercised in years, walk for 5 minutes. Then add another 5 minutes the next week and so on. I began walking half a mile and eventually moved up to a minimum of 5 and averaging over 15000 steps a day. Walking not only began to tone my body but increased my energy and helped me keep up with my kids. Don’t like working out in a gym? Head to your local high school track or find a buddy to walk with on a nature trail.

Compare yourself. I did this far to often. Why am I not loosing as fast as her? Why can’t I tone more? Why don’t I look as good as her when we are at the same weight? Every single person is unique in their own way. If you are following your plan and getting healthy, that’s all tha matters!

Take progress photos. Now when I was at my highest, I hated photos. It breaks my heart because I hated the way I looked so much we didn’t have a family picture of all four of us until our daughters 1st birthday. However, I did take stomach and leg progress pictures as I got deeper into my weightloss. When I look back now, I am so thankful I did so I can really see how far I have come.

Don’t always focus on the scale. I’m one who constantly has to weigh myself. Not because I obsess but because it lets me know how the food I eat effects my body. But after I got below 190, I began to see changes in my body and not the scale. Guess what? It’s just a number. How your body feels, acts, and looks is what’s most important.

Don’t give in. This is hard because sometimes I’ll be honest, I have. It’s okay to treat yourself here and there but also know it’s okay to say no. Going out to eat? Look for a meat with green veggies. At fast food? Order a burger no bun or ketchup. Keto doesn’t have to be expensive if done right. Shop sales and watch out for hidden chemicals and ingredients. 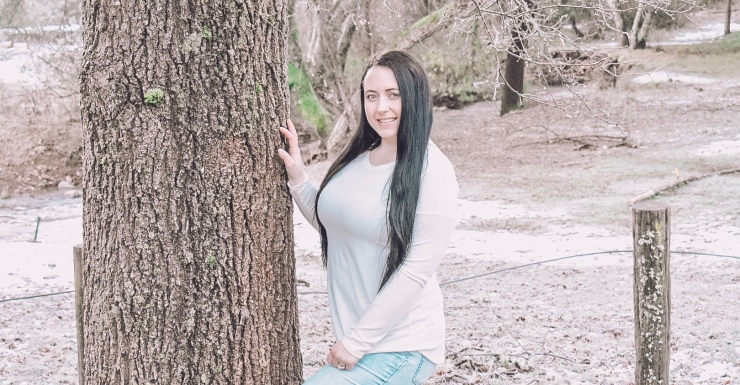 Now I’m not here to say Keto forever is healthy. I have taken breaks periodically since hitting my goal. I also still would like to loose another 15 pounds to be happy and truly feel comfortable in my weight and health. But let me just say, Keto changed my entire life. Before Keto, I was sick constantly due to my lupus and was even on an immune suppression medication because my lupus was flaring. I was on a high dose of Thyroid medication and constantly sick from my Crohns. Now over a year later, I take one medication a day with of course a rescue stomach medication every great while. My health has take a 180 and my doctors are shocked. I wake up before the sun rises and have more energy than I ever thought possible. I became the mom I wanted to be; the mom who can run and play without getting out of breath. I fell in love with myself again, truly loving my skin and body. Is it perfect? No I have loose skin and scars. But I’m healthy and that’s all that matters to me. And for that, I have the Keto diet to thank.